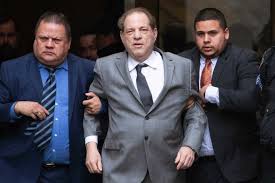 Former Hollywood producer, Harvey Weinstein has been taken to hospital after being convicted of sexual assault and rape.

Weinstein was found guilty of a criminal sex act for assaulting production assistant Mimi Haleyi at his apartment in 2006 and the third-degree rape of Jessica Mann in 2013 – an offence carrying a maximum term of 25 years.

The jury of seven men and five women found him not guilty on the most serious charge, predatory sexual assault, which could have resulted in a life sentence.

After the verdict, officers helped Weinstein unsteadily to his feet before leading him away.

The 67-year-old was on his way to the notorious Rikers Island jail to await sentencing on 11 March, but he was later taken to Bellevue, which has a unit that provides medical care for prisoners.

Weinstein’s representative Juda Engelmayer described this as a “precautionary measure” – and some US media outlets reported that he complained of chest pains.

Third-degree rape is when a person engages in sexual intercourse with someone who is incapable of consent. It comes with a maximum jail term of four years.

His lawyer Donna Rotunno said: “Harvey is unbelievably strong. He took it like a man.

“He knows that we will continue to fight for him, and we know that this is not over.”

The trial has been seen as a watershed for the #MeToo movement.

Harvey Weinstein was once the king of Hollywood, a man with the power to make and break careers in the movies.

It was a moment that gave birth to the #MeToo movement as women came forward to detail incidents involving powerful figures in the entertainment industry and beyond.

Police investigations into the allegations against Weinstein stretched from Los Angeles to New York and London.

His appearance before the cameras, handcuffed and flanked by police officers after being charged by prosecutors in New York, was a striking moment.

The victims, actress Jessica Mann and production assistant Mimi Haleyi, gave graphic evidence during the course of the four-week trial.

But prosecutors also called as a witness the actress Annabella Sciorra, who claimed Weinstein raped her in her apartment in the early 1990s.

Although the allegation was too old to bring a criminal prosecution, it was intended to show Weinstein had engaged in a pattern of behaviour as support for the other charges.

Three other women also gave evidence to the trial about their alleged experiences with Weinstein even though they were not named in the charges.

Under the “Molineux rule” in New York, such witnesses are allowed to testify to “prior bad acts”.

Throughout the trial, Weinstein’s legal team argued that all of the alleged incidents were consensual.

Many of those who have made accusations against Weinstein have attended the trial.

A number of them were part of a civil case against him and his companies.

But the criminal jeopardy is not over for Weinstein.

On the first day of his trial in New York, prosecutors 2,500 miles away in Los Angeles announced new charges against him.

He is accused of rape and sexual battery of two women in hotel rooms on successive nights in 2013.

If convicted on those charges, he could face 28 years in prison.