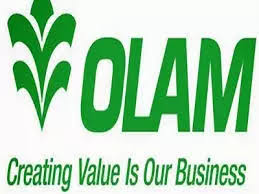 As a way of attaining self-sufficiency in tomato production and processing, Olam, a leading player in the Nigerian agriculture value chain recently embarked on a pilot farming project in the country.

Executing the project through its subsidiary, Caraway Africa Nigeria Ltd, it acquired 20 hectares of land for this purpose and set up farms in Karfi, Kano State, as well as Masama and Guri, both located in Jigawa State. The farms are solely dedicated to the production of tomatoes.

While the tomatoes were transplanted in October 2019, harvest commenced in February 2020. Reji George, Olam Nigeria’s Vice President in charge of Farming Initiatives, said preliminary results point to a bountiful harvest.

He stated that each of the farms were on course to produce 30 metrics tons of tomato per hectare, as against the 7.5 metric tons per hectare which is Nigeria’s average yield for tomato.

Reji added that the commercial pilot farming initiative which Olam Nigeria is embarking upon through Caraway Africa Nigeria is a precursor to a backward integration project for tomato paste production which will commence in March 2021.

A major challenge confronting the production of tomatoes in Nigeria is a lack of good variety seeds to buy. Another problem is extremely poor yields as low tomato production lead to higher prices, thereby making it unattractive for processors to purchase.

These challenges are also linked to the unwillingness of farmers to produce tomatoes in large quantity because they want to avoid product decay and losses because of lack of proper storage and preservation facilities.

Addressing the challenge of poor tomato seeds, Reji said Olam has signed an MOU with the World Vegetable Centre, a globally renowned research institute and prominent seed producer and developer, for the supply of 18 varieties of seeds, exclusively for Caraway Africa Nigeria.

He added: “We have also decided to go for an additional eight varieties of hybrid tomato seeds already existing in Nigeria which have a higher yield potential, but which the farmers are not using because of the cost. We have selected tomato seed varieties which produce fresh tomatoes as well as the variants which are good for tomato processing.”

The tomatoes which are being currently harvested at the Caraway Africa Nigeria Kano and Jigawa farms are considered to be of a higher quality than what is currently being produced by other farmers in terms of size, quality and weight. The tomatoes are products of the Nigerian hybrid seeds and the World Vegetable Centre seeds which were planted on a trial basis.

Alhaji Uba Idris Dogara, owner of Dogara Farms, who has been farming for 35 years, attested to the quality of the recently harvested tomatoes. He said: “I’m an old-time tomato farmer but the method Olam brought to this place is looking better than the previous method we were using. I have seen a lot of changes in their yields than what we have been getting before. There is a big improvement. This method is better than what we have seen.”

Emmanuel Agbo, Farm Manager of the Masama Farm and Mohammed Saulawa, Farm Manager, Abur Farm, both owned by Olam Nigeria and located in Jigawa State, said the quality of the tomatoes have attracted farmers who have visited their farms, curious to know about the farming methods that have produced such yields.

Speaking on the attraction, Saulawa said: “They have seen the difference in terms of the fruit size and the agronomic practices that we have employed here which are not the conventional farming practices that they are used to. You can keep the tomato variety for a week without it getting spoilt, unlike what the farmers take to the market which decays by the second day. They have seen how we apply fertilizer and how we are consistent with our spray regime. They are visiting the farm to understudy and see how they can replicate these methods in their own farms.”

Reji George added that Olam, through Caraway Africa Nigeria Ltd., would soon commence a farmer’s outgrower programme as a means of supporting the farmers and also boosting tomato production in Nigeria. According to him, 1,000 farmers will be engaged in the first year, while Olam plans to acquire about 500 hectares of land for the purpose which would kick off by September 2020. The first set of tomatoes from its farmer outgrower initiative would be ready for harvest by February 2021. He added that the firm was in discussions with developmental organisations to build the capacities of the outgrower farmers in the areas of tomato planting and cultivation.

According to him, the farmer outgrower programme would be modelled after the Olam Rice Outgrower initiative, which he described as the best outgrower scheme in Nigeria.

He further added that the tomatoes for the processing plant would be sourced through yields from its own commercial farms, yields from the farmers under its outgrower initiative and buying through agents in the open market.

Speaking on how to stem post-harvest losses, Reji stated that the tomatoes would be taken to the
firm’s processing facility on the same day of harvest.