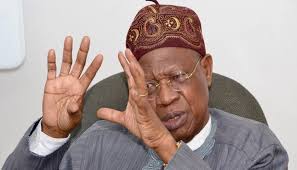 Minister of Information and Culture, Alhaji Lai Mohammed, has
tasked the Nigerian Tourism Development Corporation, NTDC to adopt
creative ways of actualizing its mandate of developing and promoting
tourism in Nigeria, with a view to attracting tourists to the country.

The Minister gave the charge when he paid a working visit to the NTDC
headquarters in Abuja on Tuesday to kick-start his tour of agencies
under his ministry.

According to him, “The truth of the matter is that NTDC is not just the apex
organization for tourism, it’s actually at the centre of all these
tourism activities and when you look at your Act, it actually mandates
you to develop, promote and market tourism in Nigeria.

Alhaji Mohammed, who was accompanied by the Permanent Secretary in the ministry, Deaconess Grace Isu Gekpe, said it is important for the NTDC
to understand its pivotal role in coordinating all the activities in the tourism sector, and to realize its huge potential in view of its capacity to create employment and contribute immensely to the nation’s Gross Domestic Product, GDP.

He stressed the need for the NTDC to appreciate that tourism is beyond
mere sightseeing as it encompasses the entire creative industry, which
includes film, music, gastronomy, fashion, photography and monuments.

“There are many reasons why people should come to Nigeria. We are a
country of colours. We are a country of about 250 ethnic groups and
each with its own history, its own culture and we are blessed with
miles and miles of beaches. We have an almost all-year round good
weather.

“This is where I think the NTDC will need to work even more closely
with the ministry so that we can actually actualize the potentials of
this industry and make it not just the fastest growing sector of the
economy of Nigeria but also increase its contribution to the GDP from
1.24% to 3 or 3.5%,” he said.

Speaking, the Director General of the NTDC, Mr. Folorunsho
Coker, said it is important to have a legal framework to harness the
potential of the tourism sector as a deliberate policy to develop the
sector.

He solicited the support of the ministry, especially in utilizing its
Information platforms to promote tourism at a global scale.

Mr. Coker later took the Minister on a brief tour of some of the
facilities at the NTDC headquarters.