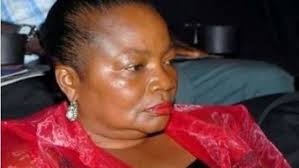 Veteran Nollywood actress, popularly known for her role in movies such, as ‘Deadly Passion’ and ‘End of the Wicked Patience Oseni is dead.

She died on Monday in Calabar, Cross Rivers State.

The news of her demise was disclosed by her daughter, Augusta Akomolafe.

She told the National President of AGN, Ejezie Emeka Rollas, that her mother had died.

Also, Nollywood actress, Ejiro Okurame, announced her death through her Instagram page on Tuesday, February 18, 2020, where she shared a photo of the actress and captioned it with a post.

“You fought a good fight 😥😥 God bless your soul as you meet with your Creator😫😥 Rest in Peace Legendary MA Patience Oseni,”

Originally from Ogun state, she started her acting career in 1995 when she first starred in the movie ‘Deadly Passion.’ Patience Oseni rose to prominence in Nollywood back in the late 1990s with her role in the movie ‘End of the Wicked.’