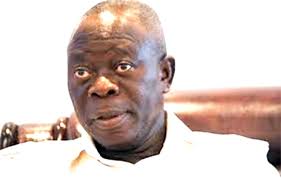 Protesters with placard have stormed the All Progressives Congress, APC Secretariat in Abuja demanding the sack of the national chairman, Comrade Adams Oshiomhole.

The group of protesters, who refers to themselves as “Concerned APC Youths” blamed Oshiomhole for making the party lose several states under his watch.

One of the leaders of the protesters, Agricola Ejembi said the group wants President Muhuammadu Buhari to intervene in the affairs of the party to address its dwindling fortunes under Oshiomhole’s leadership.

According to the angry protesters, the latest state won and lost is Bayelsa.