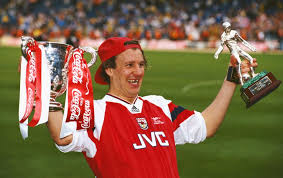 Professional footballer and Arsenal star, Paul Merson has opened up on his struggle with alcohol and drug addiction as well as depression.

Merson made the disclosure while speaking at the Sky Sports ‘heads up’ campaign.

The football legend said that at the time, he went around thinking he was Hollywood actor Brad Pitt, and that he wasn’t prepared to be a footballer which led to his addictions.

”I loved it, I sit here now and my life is completely different but when I was in my young-20s, it was brilliant. I loved it, it was the dream”

“Going out, you look like Brad Pitt because you’re playing for the best team in the country. But of course, it was all masked. You have to put a smile on your face.

‘Behind the scenes, you’ve just lost all of your money, and there’s going to be a big story breaking in the paper next week about you with a girl you were with three weeks before who sold their story.

‘All of that stuff is on you, and you have nobody to talk to. Not a soul. Nobody in the world. All you can do is push it down and down you.’

‘I used to lie on the couch and say: “Why can’t I be like Alan Smith? Why can’t I be normal?” He lived his life like I wanted to, but I couldn’t.

‘He’d finish training, happily married and always seemed content, no turmoil. I was never content. He didn’t have to wake up Sunday morning, look through the paper frantically and think: “Thank God, nothing in there”.

He admitted that he was not prepared for life as a footballer and his struggle with addiction after growing up on a council estate.

‘I couldn’t cope with life. I was a council lad who came from a council estate, playing at a big club with big headlines, and I couldn’t handle it.

‘So I drank and drank, and that led to drugs. Once that happened, I withdrew from the lads at Arsenal. That’s what addiction does, it wants you on your own, away from people.

It doesn’t want you with your best mate asking you: “What are you doing with your life?” I was drinking, gambling and taking drugs indoors. I’d get back from training at 1 pm, I’d pull the curtains and my head would be gone. I’d wait until the next day and do it again.’