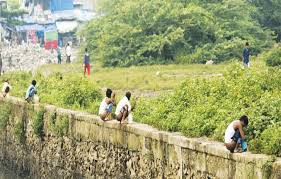 Magaji disclosed this at a one-day sensitisation and partnership meeting organised for Water, Sanitation and Hygiene, WASH Coordinators and Community radio personnel in Bauchi.

The GM said that Gov. Bala Mohammed became disturbed with the prevalence of open defecation among the people and directed stakeholders to work out strategies to reduce the prevalence.

“The Governor directed all stakeholders in WASH sector to redouble efforts and work towards meeting the water supply and sanitation needs to eliminate open defecation in the state.

“The statistics on open defecation, accessible water services and sanitation in the state are disturbing,’’ he said.

According to him, we organise the sensitisation and partnership workshop for WASH stakeholders in the communities and media personnel to strengthen the partnership and work towards attaining an open defecation free society.

He explained that open defecation has negative effects in public health, educational attendance and socio-economic development of a state.

On her part, Mrs Juliana Enoch, the Programme Officer of RUWASA, stressed the need for straightening the partnership between WASH stakeholders and the media on awareness creation to educate people on how to stop open defecation.

Enoch noted that the media have been charged with the responsibility of creating programmes on public hygiene that will encourage sanitation and personal hygiene.

“These programmes would encourage individuals to take up the responsibility of enhancing their hygiene as well as overall health.

“Knowing the importance of their environment, help them work towards ensuring that they do not harm themselves by partaking in open defecation,” he said.

Alhaji Ahmed Mohammed, the Director Community Radio, Bauchi Radio Corporation, BRC, commended RUWASA for the collaboration that would bring an end to open defecation and improve hygiene in the state.

He assured them of cooperation from all the 10 community Radio stations on effective performance from the personnel to work out strategies and awareness to curb the menace of open defecation.

President Muhammadu Buhari had in 2019 declared a state of emergency on Nigeria’s water supply, sanitation and hygiene sector.

Buhari urged state governments to complement the effort by according the sector similar recognition to achieve the SDG targets for WASH by 2030.