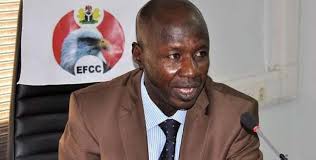 Uyo Zone of the Economic and Financial Crime Commission, EFCC, said that it has arrested over 200 persons and secured 70 convictions for various corrupt practices in 2019.

The Uyo Zonal Head of EFCC, Mr. Dugum Garba, disclosed this to newsmen after a street sensitisation campaign against corruption in Uyo on Friday.

The street walk was organised by Economic and Financial Crime Commission in collaboration with National Youth Service Corps, NYSC.

Garba said that corruption was not an easy task to be engaged by only the EFCC or any anti-graft agency to handle.

He urged the citizens especially youth to cooperate with the agency by giving information necessary to track down corrupt persons advising them  never to indulge in corrupt practices or aid those trying to engage in such practices.

The Zonal Head added that it was a social destruction that could hinder the development of the future generations.

“We had about 70 convictions in Akwa Ibom State last year we have recovered a lot of money and we are progressing. We have arrested 200 persons arrested so far.

“This is an enlightenment campaign to sensitise and create awareness to people in the street about corruption. Corruption should not be left to anti-corrupt agencies alone it is a difficult task which means that everyone should be incorporated in fighting corruption.

“You youth are the backbone of this country, the future leaders and the pride of every society is to try and bequeath a decent society.

“Look at what is happening in the northeast, what is the source of their money? It comes through some scrupulous elements that steal our money, so, do not allow your future to be stolen away from you.” Garba said.

Speaking, Akwa Ibom State Coordinator of NYSC, Mr Julius Amusan, said that NYSC has been in partnership with EFCC for a long time.

Amusan said that he marched out 500 corps members to join in the sensitisation exercise because of the seriousness government attached to the fight on corruption.

“We have been collaborating to see that corruption is fought to a stand still. That is the reason why we are joining this campaign today.” He said.

He said the leadership of the EFFC felt that the best way to ‘catch them young’ was through the youths, especially corps members who would be entering the labour market soon.