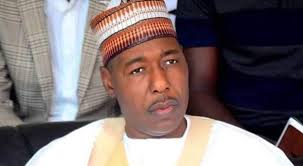 Borno Coalition for Justice, BCJ has fingered Governor Babagana Zulum of Borno State and his aides in an attempt to embarrass President Muhammadu Buhari during his visit to Maiduguri on Wednesday.

The coalition made this known on Thursday at a press conference to address the “despicable plot at embarrassing President Buhari by aides of Borno Governor”.

Speaking on behalf of the Borno coalition, convener Mohammed Ali described the gesture as “cowardly and insensitive”, an evidence of Zulum’s hatred towards the president.

As indigenes of Borno, the group recounts that President Buhari enjoys demigod status in the state owing to his giant strides which dates back to his military days and it is impossible for the same people to turn their backs on him.

The coalition said the handwriting of the governor, his predecessor and godfathers was all over the show of shame.

The Borno Coalition for Justice, therefore, advised Zulum to call his political aides to order and go a step further by tendering an unreserved apology to President Buhari.

The group, however, pleased with President Buhari not to be perturbed and continue his drastic approach to insecurity by declaring a state of emergency on the state.

“This is indeed unsolicited and an indication that the government of Borno State is not appreciative of the numerous sacrifices President Muhammadu Buhari has made for the people of Borno State in ensuring that the Boko Haram insurgency comes to an end.