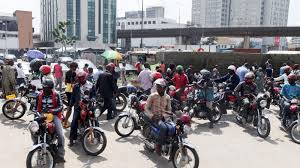 Ogun State government has said that it will not allow in okada riders whose operations were recently restricted by the Lagos State government and are contemplating migrating to other states.

Mr. Remmy Hazzan, Special Adviser on Public Communications to Governor Dapo Abiodun, made this known in a statement issued on Wednesday in Abeokuta.

The Government was reacting to a statement credited to the Chairman Caretaker Committee on Transportation in the State, Femi Adeniyi, who was on Monday reported to have assured the motorcyclists that left Lagos to the state of adequate accommodation.

Hazzan said the Ogun State does not have the capacity to cope with the menace and security challenge the influx of the okada operators from Lagos and any other neighbouring state would pose.

He noted that Okada operation is fraught with many challenges, including that of security, which is the reason why their operations have either been totally banned or restricted in many parts of the country.

Hazzan asserted that deploying motorcycles for commercial operation is not in the schedule of the National Transportation policy, adding that the Ogun State government is already looking into the issue with a view to coming out with a clear policy direction.

The special adviser noted that although its doors are open, it is only for genuine businessmen and foreign investors to take advantage of the proximity of the Gateway State to the nation’s commercial and biggest market.

The statement noted that Governor Dapo Abiodun, since his assumption of office on May 29, 2019, has put in place, measures to create a conducive environment for businesses.

According to him, “As the state with the largest industrial base, Ogun State will continued to welcome more investors, but not okada riders.”

“The present administration, in its determination to further enhance the status of the state as the most industrialised, has put in place policies that would attract more businesses home and abroad.

“Governor Dapo Abiodun has been meeting with potential investors in the country and even travelled abroad in his efforts to attract more investors into the state.”

The statement further stated that the present administration is desirous of providing gainful employment for her teeming citizens, but with emphasis on agriculture.

It appealed to the people to go about their normal businesses as efforts have been made to prevent security breaches in the state.

In a relative development, Osun State Government has suspended the registration of new commercial motorcyclists to prevent those who have lost their means of livelihood in Lagos State from invading the state.

A statement by Special Adviser to the Governor on Works and Transport, Toke Olaniyan, said the state would soon commence registration of motorcycle owners and riders.

The statement read, ‘At this moment we have issued a statement to stop further registration for fresh okada riders and operators.’

‘We want all persons to be observant and vigilant. Any strange motorcycle operator should be reported immediately to the security agencies”