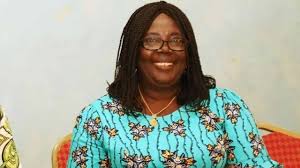 Director, in charge of Nigeria Christian Pilgrim Commission, NCPC Mrs. Esther Kwaghe, has charged NCPC staff to exhibit positive attitude to work and give in their best to the Commission.

She stated this on Wednesday during the closing ceremony of a three day in house training programme organized for the Accounts and Finance department staff of the Commission at the NCPC Corporate headquarters, Abuja.

Mrs Kwaghe informed that the training was borne out of the need for staff to update themselves in their field of study and to acquire more knowledge, expertise and professionalism in accounting.

The NCPC boss encouraged the Accounts and Finance department staff to keep to the best international practices.

According to her, “Acquiring more knowledge is the only way anyone can stand out”.

Mrs. Kwaghe added that other staff of the Commission would be trained in their different areas of specialization subsequently.

She admonished the participants to make judicious use of the knowledge acquired in the training and the impact should reflect in their work and schedules.

Mrs. Kwaghe, thanked the Chief Executive Officer of Funtro International Company Mr.  Sanni Adeniyi who was also the resource person at the training, for conducting an intensive training and for also giving value for the money that was spent to impact knowledge on the staff.

He informed that the participants were thoroughly trained on the application of IPSAS (International Public Sector Accounting Standard).

Mr. Oche said that the training was important for Accountants as it will enable them to key into the current reforms going on in the country.

He charged the participants to make use of the training materials given to them and see it as an opportunity of a life time.

The three-day training was on capacity building program for Implementation of Public Sector Financial Reforms, IPSAS.