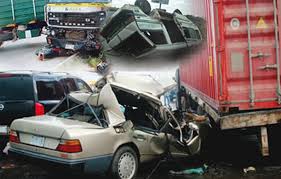 One person killed, while three others were injured yesterday in a multiple road crash involving three vehicles around Obosi flyover on Owerri-Onitsha Expressway in Anambra state.

Kumapayi said the accident, which occurred at about 6:30 a.m, could be attributed to speeding and loss of control.

According to him, “The fatal crash, which involved six people, all males, led to the death of one person and three others sustained various degrees of injuries.”

An eyewitness told FRSC that the crash was as a result of speeding and loss of control.

He said, “Before we got there, the injured victims have been rushed to the hospital and the corpse deposited at the mortuary by a good Samaritan”

Kumapayi also said that the clearing of obstruction was ongoing at the scene of the crash.

He, however, condoled with the family of the dead and wished the injured victims a speedy recovery.

The FRSC official advised all road users to always call the FRSC emergency toll free number, 122, in the event of any emergency for a prompt response to victims of road traffic crashes.

The sector commander admonished motorists in the state to drive with care and desist from speeding, wrongful overtaking and all forms of dangerous driving.

In a relative development, no fewer than 10 persons lost their lives while seven others were critically injured in an auto crash which occurred in Eripa community of Boluwaduro local government area of Osun State.

Newsmen gathered that the bus belonging to Saint Peter and Paul Catholic Church, Lagere, Ile-Ife was coming from Oke Maria in Otan Ayegbaju town when it crashed.

It was reported that embers of Catholic Church and people from other denominations annually converged on Oke Maria mountain for prayers session overnight.

An eyewitness informed newsmen that the driver of the bus lost control of the vehicle and rammed into a fence at the other side of Iree/Eripa/Otan Ayegbaju/Ila expressway before falling into a deep pit.

Officials of the Federal Roads Safety Corps, FRSC and policemen were spotted at the scene trying to remove the trapped victims in the vehicle.

She explained that 10 persons died in the auto crash, while seven others were injured, saying that policemen immediately moved to the scene of the incident to evacuate the victims.