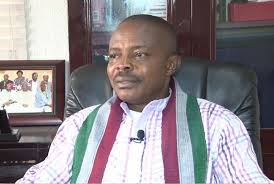 President of the United Labour Congress, ULC, Mr. Joe Ajaero, has urged the Federal Government and any other person thinking of borrowing pension fund to finance infrastructure to look elsewhere.

Vice President, Prof. Yemi Osinbajo, who spoke at the National Economic Council, NEC meeting, which he presided over recently, disclosed that the government had concluded plans to borrow N2 trillion from the current N10 trillion pension fund to finance infrastructure.

Ajaero noted that Nigerian workers work for their retirement benefits, as they do not enjoy while at work, saying that such fund which is the life-blood of Nigerian workers should not be tempered with.

He lamented that workers no longer have confidence in the sincerity of politicians to deliver on the area of safety of life-savings when it is entrusted into their hands.

According to him, “It is immoral and careless to subject such fund, which is the life-blood of Nigerian workers to the itchy-fingers of Nigerian politicians, no matter how well-intentioned, especially when we know that ‘the way to hell is littered with good intentions”

He said, “We find it difficult to muster any confidence from anywhere to entrust our livelihood in the hands of a group that has historically and systematically decimated our collective resources over the years, pauperising us at the slightest opportunity, without any conscience.

“We do not have confidence in the sincerity of our politicians to deliver on the area of safety of our life-savings when it is entrusted into their hands. They have already gorged themselves full with public wealth and nothing will stop them from doing the same with the pension fund if we are not watchful”

Also speaking, President of Nigeria Labour Congress NLC, Comrade Ayuba Wabba, while faulting the government’s plan explained that the main objective of the scheme is to ensure that after retirement, every worker in public or private sector who had contributed to the scheme receives his/her retirement benefits as at when due.

He further explained that the guidelines on investing pension funds, which had the input of organised labour, pension union has the primary objective of an adequate return on investment and the safety of the fund.

Wabba said, “The pension fund administrators are investing for maximum return on investment for the benefit of the beneficiary and not borrowing. The Pension Reform Act 2014 provides for investments, not borrowing. The Pension Fund Administrators, PFAs is to invest based on their risks and reward appetite; but usually in minimal risk entities. They are not to be coerced or cajoled to invest because it is criminal to do so”

The NLC boss further stated that labour is curious that as a critical stakeholder, as provided in the Act, both NLC and Trade Union Congress, TUC was not consulted on the borrowing.

He said, “It is a violation of a provision of the Pension Act five years down the line, the board of Pencom statutorily saddled with taking or approving decisions as weighty as this has not been constituted. Pencom is a very critical labour market institution”

He reiterated that labour concern is further deepened by the fact that at the moment, government’s indebtedness to pensions in accrued rights, pension differentials, minimum pension guaranty, pension increase, among others are in excess of N400 billion.

Director-General of the Nigeria Employers’ Consultative Association, NECA, Mr. Timothy, while expressing grave concern at the fate of the Nigerian workers, in the face of incessant borrowing by government at all levels without corresponding development, noted that it was unthinkable for government to borrow from the pension fund when the citizens have not felt the impact of the mounting debt of government at all levels.

Olawale asserted that the action of government has the potential to threaten the scheme and erode contributors’ confidence, adding that what is paramount to contributors and other stakeholders alike is the safety of the fund, which, unfortunately, the government cannot guarantee.