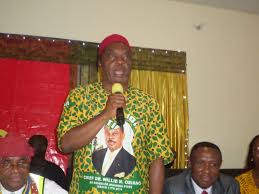 Leadership of All Progressives Grand Alliance, APGA, in Anambra State said that contrary to insinuation in some quarters, the state government controlled by the party was not in any conflict with the organized labour over the issue of the controversial minimum wage.

The state chairman of the party, Sir Nobert Obi, who spoke with journalists in Awka, described the state workforce as most hardworking and friendly group as he warned opposition parties in the state to stop influencing those he described as faceless and illegal groups whose aim was to destabilize the state

Obi specifically distanced the party from a statement credited to a group known as ‘APGA media warriors’ which castigated the organized labour for faulting Governor Willie Obiano’s implementation of the new minimum wage in the state.

According to Obi, “APGA has nothing to do with the statement, as there has been a cordial relationship between the APGA-led government of the state and its workforce”

“That is why the state chapters of the Nigeria Labour Congress, NLC, and the Trade Union Congress, TUC, jointly gave the “Most Workers Friendly Governor in Nigeria” award to Governor Obiano.”

He said further that it was on record that Anambra State had not experienced industrial unrest since the incumbent governor came on board six years ago, recalling that without prompting, Governor Obiano increased workers’ salaries by 15 percent across board in 2014 and promoted those who were stagnated on one grade level for several years.

“No previous administration in Anambra places high priority on workers welfare than the present state government. I, therefore, implore workers and the citizenry to shun this propaganda instigated by our political opponents.

“APGA governments in the state since 2006, has consistently given the people good governance and unprecedented verifiable democracy dividends,” he said.

Obi expressed confidence in the ability of the Obiano administration and the labour unions to quickly and amicably resolve their differences over the new minimum wage and its consequential adjustment controversy as soon as possible.