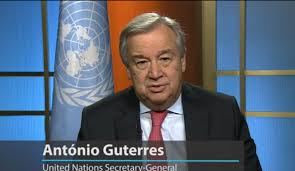 United Nation Secretary-General, Antonio Guterres, has said that promotion of gender equality and the meaningful engagement of women and girls are keys to poverty eradication in Africa.

Guterres made this statement in his address during the 33rd African Union, AU summit, which opened in Addis Ababa, the capital of Ethiopia.

He however stated that, althoug the continent had made progress in gender equality and women empowerment, saying that much needed to be done.

United Nation Secretary-General said that the world was still dominated by men, emphasising that the search for global peace and sustainable development required women’s leadership.

Guterres said, “That is why I have made gender parity a centerpiece of UN reform, and gender equality and the advancement of women a top priority in all the UN does.

“It is our joint responsibility to ensure that women are not excluded from critical decision-making in peace processes and post-conflict governance.

Guterres also reiterated his advocacy for youth empowerment and engagement at all levels of leadership in the continent.

He however described young people as agents of change, stressing that they had a lot to contribute and must, therefore, not be sidelined or excluded in anyway..