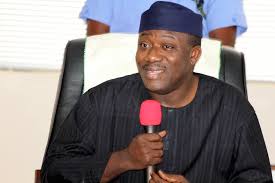 Fayemi urged the newly inaugurated Head of Service to use her position to bring out the best in the state’s public service.

He added that his administration had institutionalised a process-driven structure to ensure that only the best got to the leadership of the state public service.

Fayemi however, expressed optimism that the new head of service would succeed, having been well familiar with the terrain while on acting capacity.

He urged Babafemi to align herself with government policies and programmes.

According to him, “I am sure that the terrain is not strange to you, having been in this position in acting capacity.”

“Now that you have risen to the zenith of your career, with your appointment as the substantive head of service, it is my belief that you will continue the good work.

“You were chosen out of many other qualified permanent secretaries to steer the ship of the state civil service. This strategic position should be used to bring out the best in our public service.

“You are inheriting a very active public service that has keyed into the vision of this administration. I expect you to hit the ground running and make your impact felt,” the Governor said.

He, however, reiterated his administration’s commitment to transparency in corporate governance, saying that government would not tolerate any act that would breach the accord he signed with Ekiti people.

While acknowledging the efforts of the immediate past head of service, Mr. Deji Ajayi, in reforming the service, Fayemi stated that much still needed to be done to enhance quality service delivery.

He added that Babafemi should see her appointment as a call to serve and be a part of positive history.

In her response, Babafemi acknowledged the enormous responsibilities associated with the office of the head of service.

The new Head of Service expressed the conviction that a lot could be achieved through harmonious working relationship among all the cadres of the state public service.