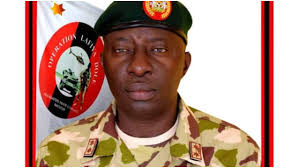 Theatre Commander, Operation Lafiya Dole in Borno, Maj. Gen Olusegun, Adeniyi has warned drivers who give money to security personnel at checkpoints to desist from such act, saying that any driver caught will be arrested and prosecuted.

The commander gave the warning during the reopening of Maiduguri-Dikwa road in Borno on Sunday. The 86km road was closed to motorists in 2015 at the peak of Boko Haram activities.

He also warned the officials of the NURTW against imposing unnecessary charges and levies on commuters plying the Maiduguri-Dikwa road thereby exposing them to untold hardship.

However, with fishing business now expected to resume from Gamboru to Maiduguri due to the development, the Gamboru fishing community has been urged to cooperate and share information with the military while carrying out their legitimate business.

Maj. Gen Adeniyi said the military is ready to provide an enabling environment for the fishing community to thrive, but warned that under no circumstances should the community pay money or any form of assistance or gratification to the Boko haram terrorists.

“It is generally known that it is very difficult for business to thrive if there is no peace and security. It is also a known fact that Boko Haram is using some of the fishing businesses to fund their campaign of terror.

“If we find you collaborating with Boko Haram or given them gratification secretly, we will stop you from doing the fishing activities,” he warned.

Also speaking, Alhaji Bello Moduganari, the Borno NURTW Chairman, and Alhaji Abacha Mandala, the Chairman of Fish Farmers Association of Nigeria, commended the government for reopening of the road.

Moduganari assured the government of the union’s cooperation with the military’s counter-insurgency operations.

Mandala also said that the reopening of the road would revamp fishing activities and provide a livelihood to millions of fishermen within the state and neighbouring states.