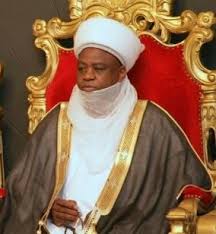 As the issue of insecurity continued to be the major challenge of the government, the Sultan of Sokoto, Alhaji Sa’ad Abubakar, has however rejected the new Northern established security outfit known as ‘Shege Ka Fasa’

Abubakar, who described the security outfit as a way to ‘score cheap political points’ called on the northern elders to call the youths of the region to order immediately.

Sultan of Sokoto stated this while speaking at the Northern Security Meeting which was held in Kaduna on Thursday.

According to him, “I saw the security outfit on the media. Now, the elders allowed these youths to go forward”

” The elites are our problems, the youth will do whatever they like, if the elders don’t take the lead and think they are right. They have to caution these youths by giving them good leadership.

“The youths launched their own security outfit they call it Shege Ka Fasa’, meaning what?

“I am calling on northern elders to caution them. Don’t allow these youths to take over leadership from you. You have to reach out to everybody no matter how low the person is” he said.

The Sultan of Sokoto further advised the elders to caution the youths by taking the bull by the horns, adding that they should not allow the youths take over their responsibility.