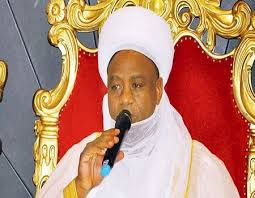 Statement of the Press Conference Addressed by the Nigerian Supreme Council for Islamic Affairs (NSCIA) on the State of the Nation on Wednesday, September 5, 2019 at the National Headquarters of the Council, National Mosque Complex, Abuja

DECLARE A STATE OF EMERGENCY ON INSECURITY!

Gentlemen of the press,

The Nigerian Supreme Council for Islamic Affairs (NSCIA), under the leadership of its President-General and Sultan of Sokoto, His Eminence, Alhaji Muhammad Sa’ad Abubakar, mni, CFR, is appalled and horrified by the state of insecurity in Nigeria. These days, hardly does a day pass without some heart-rending news about kidnapping, armed robbery, violent attacks on and savage/ritual killings of innocent Nigerians. The level of insecurity in the country has reached an unacceptable crescendo that declaring a state of emergency on it appears not only necessary but also pressing.

Therefore, the Council stridently calls on the Federal Government and all its agencies (including the military) to use whatever means possible to arrest this descent into anarchy. Nigeria cannot just continue like this with the blood of the innocent being shed unjustly and human security being at its lowest ebb. The situation of Nigeria today is desperate and desperate situations require desperate measures in the collective interest of well-meaning Nigerians. Let the monster of insecurity be tackled actively and proactively with the full weight of Nigeria’s security and defence capacity!

It is rather discomfiting and heart-rending that some misguided elements in our country have resorted to the dangerous game of playing politics with security. Political mercenaries and religious combatants united by rapacious greed and chronic hatred have occupied the public space with putrid writings and toxic speeches. For the sake of fleeting popularity and Twitter-trending, some public figures with ulterior motives offer themselves as willing tools in the hands of disgruntled politicians to play politics with insecurity without remembering that when the fire they are stocking becomes an uncontrollable conflagration, there would be nowhere for them to play their politics as the nation would have been consumed. It is a failure of education that people goaded by ambition cannot see the big picture and the danger inherent in their actions.

In essence, rather than see the monstrosity that insecurity has become as a national challenge that requires collective action, agents of destabilisation seek to score cheap political goals and engage in self-indicting propaganda. One of them is the recently organised street show by some religious leaders who give political coloration to grinding insecurity fueled by hypocrisy and hubris. But efforts must be doubled through the instrumentality of hard work and prayers so that the enemies of Nigeria will be unveiled and this is where Government must double or triple its efforts at counter-insecurity measures.

We want to state in unequivocal terms, and for the umpteenth time, that Boko Haram does not represent Islam or Muslims. The group and the enemies of Islam hiding behind its mask are pursuing a rogue, venal and doggy agenda far removed from Islam. It is therefore the height of insincerity, wickedness, falsehood and hypocrisy to suggest that Boko Haram is a ploy to eliminate Christians, a dummy being promoted by some dealers camouflaging as religious leaders to their followers and the outside world. It is incontrovertible that more Muslims, including Imams, have been slaughtered, displaced and dismembered than Christians since Boko Haram became what it is: a hydra-headed monster. Indeed, more mosques have been bombed or destroyed in the bloody campaign, which has consumed precious lives including those of our professors. To suggest that Christians are killed because they refuse to embrace Islam stands logic on its head. Were Muslim scholars and individuals killed in mosques, market squares and villages killed because they refused to denounce Islam?

In September, 2018, a prominent Muslim General was murdered in cold blood and his body was dragged to an abandoned mining pit filled with water in Dura-Du District of Jos South Local Government Area of Plateau State. The vicious Christian community that perpetrated the dastardly act then mobilised its shameless and barely clad women who protested unsuccessfully against emptying the pond in which the general’s remains and his car were found. We never generalised by accusing Christians in Nigeria of murdering Muslims or turned the unsavoury development to a Muslim-Christian brouhaha. We rather called for the arrest and prosecution of the irresponsible women and those who committed the murder. Nothing concrete has been done against the community till date, a reflection of the selective justice usually at play against Muslims.

A false flag is defined as “intentional misrepresentation, especially a covert political or military operation carried out to appear as if it was undertaken by another party.” Some terrorist acts attributed to Boko Haram are not more than false flag operations by the irredentist political and self-righteous anti-Islamic religious associations in Nigeria, who are all out to discredit the government or Muslims by hook means or crook and provoke foreign occupation of the country. To them, the country should just be occupied by the foreign forces just because they no longer have access to dollar and arms-carrying private jets to South Africa and state-sponsored visits to Jerusalem. That is why everything must be reported to their American agents and they celebrate their achievements whenever Nigeria is negatively mentioned in some infamous foreign lists fabricated to weaken sovereign nations.

False flag operations usually get known when they fail and that was what exactly happened in Kaduna on February 2, 2020 when a Christian, Nathaniel Samuel, attempted to bomb the Living Faith Church in Kaduna the same day that a circus was being organised in Lagos. Of course, had the mission succeeded, it would have been blamed on Muslims. Rather than admit the false flag, at least the Global Research website indicates some 42 instances where officials behind false flag operations admitted them, so-called religious leaders started to peddle shameful lies, concocting interviews and giving a fictitious name to a Christian pastor. They have some lousy misfits with dented image and corruption charges in the public space seeking to confuse the dimwitted until Facebook profiles, father’s confirmation of identity and statements of those who know the terrorist Pastor, Samuel, burst their lies. Rather than apologise to the nation, they shamelessly resort to empty rhetoric now remembering that names do not matter and terrorists have no religion!

Christians have been known to engage in terrorism in Nigeria with a view to blaming it on Muslims. Only cases of the failed ones are known. They commit murder, engage in kidnapping and resort to heinous propaganda to put Nigeria and her Muslim population on the defensive. Their media wing distorts news and skews reports to reveal and project their Islamophobia but the voiceless Muslims have Allah and He is sufficient. The Internet does not forget the following instances, out of many failed terrorist acts and false flag operations that would have been blamed on Muslims in Nigeria if they had succeeded:

1. Mr John Alaku Akpavan, a Christian, was arrested on June 5, 2011 while attempting to bomb the Radio House, opposite the International Conference Centre, Abuja.

2. Ms Lydia Joseph, a Christian from Bauchi State and failed bomber of St John Catholic Cathedral, attempted to carry out her terrorist act on September 12, 2011.

3. A Christian indigene of Akwa Ibom State, Augustine Effiong, carried out a bomb attack on Bayero University, Kano, on April 29, 2012.

4. Emmanuel King, a Christian who disguised his religious identity by dressing like a Muslim, was arrested while attempting to bomb the Redeemed Christian Church of God (RCCG) in Yenagoa, Bayelsa State, on December 28, 2011.

8. Jonathan Gyanet, a Christian police officer, was arrested while attempting to bomb ERCC Church in Akwanga Nasarawa State on April 20, 2014.

Rather than playing the blame game or playing to the gallery as ethnic irredentists and religious bigots are wont to do, what is important is to support government to eliminate insecurity in Nigeria. There is no doubt that there is a strong link among poverty, the relentless anti-corruption Tsunami and persistent insecurity in the country. That is why we are asking Government to up the ante of their efforts and give enough teeth to the Ministry of Humanitarian Affairs, Disaster Management and Social Development to bite and alleviate the pains of those who are poor, distressed and displaced. In other words, we urge Government to provide enough resources for the Ministry to actualise the needed interventions in making life more meaningful to the disadvantaged and the unemployed with the hope that insecurity would also be addressed through this means.

We reiterate that the Federal Government should act decisively now by declaring a state of emergency on insecurity and deploying all the security and military arsenal at its disposal to arrest the trend. Nigerians are dying needlessly to the satisfaction of the evil-minded political profiteers, ethnic irredentists and pseudo-religious agitators disguising as religious leaders. All hands must be on deck to arrest this ugly trend given that the primary purpose of government is the security of life and property of the governed. We equally urge the Federal Government to review and reinvent its security architecture by injecting more vim into security operations all over the country without further delay.

No Nigerian must die needlessly in Nigeria again. Government should urgently deploy intelligence to uncovering the sponsors, beneficiaries and perpetrators of insecurity in our dear country so that we shall not just be chasing shadows. Enough is enough!