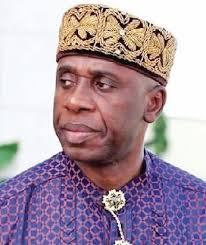 The Federal Government on Wednesday said it was in the process of developing a national transportation master plan that would help in diversifying the nation’s economy.

Minister of Transport, Mr. Rotimi Amaechi, disclosed this while briefing newsmen after concluding the inspection of ongoing projects and facilities at the Murtala Muhammed Airport, MMA, Lagos.

Amaechi was accompanied on the visit by the Minister of State for Aviation, Capt. Hadi Sirika and other top officials of the ministry.

The facilities inspected by the ministers include the new terminal building at MMIA under construction, General Aviation Terminal, GAT and the perimeter fencing around the airport.

“The government of President Muhammadu Buhari is in the process of developing a national transportation master plan that will be implemented as a fulfillment one of his campaign promises to diversify the national economy while improving non-oil sector revenues.

“While reducing dependence on oil revenues, it will also develop the rural economy, reduce unemployment and urban drift,” Amaechi said.

He said that the transportation sector held the key to any economy and formed the basis of all socio-economic interactions, adding that Nigeria was suffering the bane of inadequate transportation.

According to him, “The contribution of the transport sector to the Gross National Product, which is only 1.41 per cent, is unacceptable”

The minister said: “For a sector that plays a major role in the nation’s development, there is an urgent need to exploit the opportunities that abound within the sector to improve its contribution to the national economy.

“Countries like South Korea and Singapore have built their economies around a vibrant transportation sector.

“Although Nigeria is blessed with multiple modes of transportation that is the envy of many, these potentials have largely remained untapped.

“Our air transport and railways sub-sectors hold the key to unlocking the vast potential in our cities and rural areas.

The Buhari administration is determined to fully exploit the potential in the transportation sector.”

Amaechi said that the government, as a first step, would pursue the enactment of legislation that would open up the sector to new investments that would lead to economic prosperity.

The Minister asserted that the government was determined to revamp the railway sector with a view to enhancing national integration by encouraging mass transit of passengers and goods between and across the geographical regions of the country.

“The immediate impact will be the reduction of haulage of heavy cargoes by roads thus reducing road damage and increasing the life span of roads.

“The movement of petroleum products by rail will be re-introduced in 2016. As you are aware, we have commenced and almost completed the narrow gauge rehabilitation which will be retained for the movement of cargoes.

“At the same time, massive investments into the standard gauge to link most parts of the country with faster trains for passenger movements have begun.

“In 2016, we hope to complete work on the Abuja-Kaduna railway line as Mr. President is highly committed to it.

“Work will start in earnest on the standard gauge on the following routes: Calabar-Lagos line, which will transverse the following towns and cities: Obudu Cattle Ranch-Calabar-Uyo-Aba-PH- Yenagoa-Otuoke-Yenagoa-Ughelli-Sapele-Benin-Agbor-Asaba-Onitsha-Benin-Ijebu Ode-Ore-Sagamu-Lagos Seaports; and the Lagos-Kano: Lagos-Ibadan-Ilorin-Minna-Kaduna-Kano.”

He stated that the construction of new lines and rehabilitation of old railway lines will generate over 250,000 direct jobs and more indirect jobs, with multiplier effect on economic activities.

Amaechi further disclosed that the ongoing airports remodeling projects at Lagos, Abuja, Kano and Port Harcourt would be concluded in 2016.

“The medium and long term plans will require significant investments to upgrade and expand infrastructures to meet current and future requirements.

“As a result of limited resources for capital projects development, government is exploring the possibility of private sector participation to towards the realisation of the industry’s potentials,” he said.

Amaechi also reiterated the need for the regulatory agencies to ensure the required safety standards at all times, stressing that the government would continue to invest in providing critical safety facilities.

On the maritime sector, he said government would implement policies that encourage private sector participation and investments towards diversification and growth of the nation’s economy.

“Government will streamline all the agencies in the maritime sector for a more effective and efficient performance to meet the expectations of all stakeholders,” he said.

On his part, Sirika said the ministry would soon meet with airline operators in the country to address the challenges facing the industry.