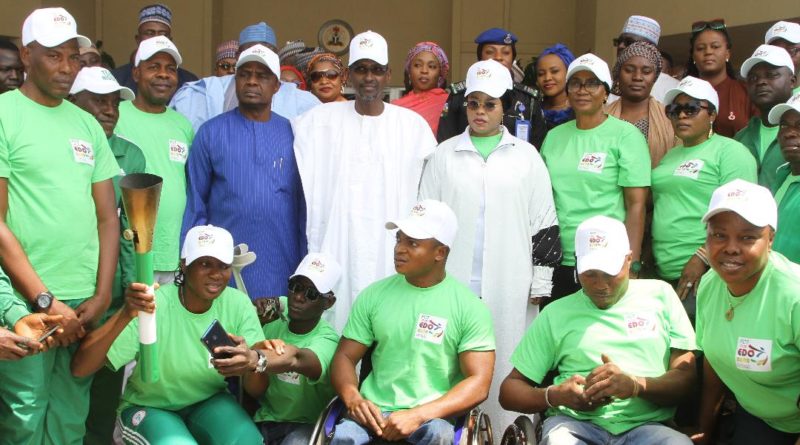 Minister of the Federal Capital Territory, Malam Muhammad Musa Bello on Monday, February 3, 2020 received the Unity Torch of the National Sports Festival at a brief ceremony held at the FCTA.

Receiving the Torch from a contingent of FCT Athletes led by the FCTA Director of Sports, Mrs. Dilichukwu Onyedinma, the Minister prayed that God Almighty will see the torch through all the 36 States and then later to Benin City in Edo State where this year’s event will be hosted.

He said, “As we flag-off the journey of this beautiful torch of unity for the unity games …we hope that God Almighty will see this torch go through all the 36 states and culminate in Benin the Sports city.”

The FCT Minister commended the Edo State contingent for its excellent performance during the event last year in the FCT which saw them emerge as the overall best.

Malam Bello also appreciated the Ministry of Sports for partnering with the FCT Administration to revive the National Sports Festival, after six years of the Games not holding. The games, he said, is now providing a platform for Nigerian sports men and women to showcase their talents.

The Minister was joined by the FCT Minister of State, Hajiya Ramatu Tijani, the FCT Permanent Secretary, Sir Chinyeaka Ohaa, the Acting Transportation Secretary, Mrs. Alice Achu Odey, among others during the flag off ceremony.

A Gbagyi cultural troupe also accompanied the unity torch to the Minister’s office where they provided entertainment during the brief ceremony.