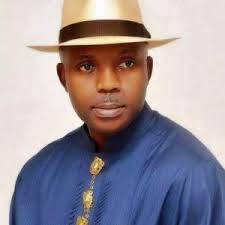 Others, who were charged alongside with him are Airworld Technologies LTD, Oyien Homes LTD and one Blessing Mutu (now at large) before Justice F. O. G. Ogunbanjo of the Federal High Court, Abuja on an 11-count charge for alleged fraud and abuse of office.

According to one of the charges, “That you, Hon. Nicholas Mutu Ebomo (m) whilst being the Chairman of the House of Representatives Committee on the Niger Delta Development Commission, between August 2014 and August 2016 in Abuja, within the Jurisdiction of this Honourable Court did procure Airworld Technologies Ltd to conceal of the sum of N320,159,689.63 (Three hundred and twenty million, one hundred and fifty-nine thousand, six hundred and eighty-nine naira, sixty-three kobo) to be paid by Starline Consultancy Services Ltd when you reasonably ought to have known that the said sum of N320,159,689.63 formed part of proceeds of corruption, gratification and fraudulent acquisition of property and you thereby committed an offence contrary to Section 18(c) (d) of the Money Laundering Prohibition Act 2011 as amended by Act No. 1 of (2012) and punishable under section 15(3) of the same Act.”

Prosecuting counsel, Ekele Iheanacho, thereafter requested a trial date and asked the court to remand him in prison.

Counsel for the defence, P. I. N. Nikwueto, (SAN) told the court that he was ready for the trial, and applied for the bail of his client.

However, Iheanacho, opposed the bail application.

He said: “My lord we cannot take the risk we took in 2018 when we granted him bail, he was released in the name of one Anthony John Ikpoyi, SAN.

“From that day till date, the defendant dishonoured the terms and conditions of bail, and never showed up to EFCC office. So many efforts were made including arresting the sureties, yet he refused to show up.

“Even the record of the court shows that the matter came up on three different times, but it couldn’t go on because they couldn’t produce the first defendant. So, my lord, his coming today to court is not voluntarily, but because of fear that arrest warrant is to be issued against him.”

Justice Ogunbanjo, in his ruling on the bail application, granted temporary freedom to Mutu, saying that he took judicial notice of the administrative bail which the EFCC earlier granted to the lawmaker.

The presiding Judge, Justice Ogunbanjo, thereafter, adjourned the case until February 25, March 4 and 5, April 22 and 28, and May 5 and 6, 2020 respectively for trial.