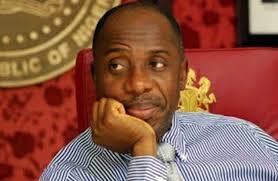 Minister for Transportation, Hon. Chibuike Rotimi Amaechi, has disclosed that the new Maritime Security Infrastructure will be launched before June.

Amaechi, who spoke on the Sunrise Daily Show on Channels Television yesterday complained the high level of security challenges in the maritime sector, promised that with the new maritime security infrastructure, the problem will be solved.

According to the Minister, “Between now and June, we should be launching. We have assured Nigerians that we will secure our water ways. Those who make money from the maritime security challenges are already battling us. We are ready for the battle, and President Muhammadu Buhari is behind us”

He said, “There are those who provide security for foreigners to get to the platforms, they will be out of business by the time the water is within the purview of NIMASA, and they can see from the beginning to the end of our waters. What will be the essence of those contracts when you have the Navy in the Water, the Army and the Air force in the air”

The Minister disclosed that his meetings and interactions with the Chinese should assure Nigerians that there was no cause for alarm, amidst the need to take personal preventive measures.

He said that government is responsible enough to handle the present situation, adding that the Federal Government has taken various preventive measures.

“This Government is not irresponsible. With nearly 200 million people, the Government has taken various preventive measures. Those we are working with didn’t travel, and obviously, there’s no way they could have had contact with those with the virus. Those who travelled are quarantined, for 18 to 21 days” the Minister said.