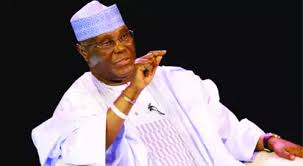 Former Vice President and Presidential candidate of the Peoples Democratic Party, PDP, Atiku Abubakar, has expressed solidarity with Governor Emeka Ihedioha of Imo state, whose election was nullified by the Supreme Court on Tuesday in Abuja.

Supreme Court on Tuesday removed Emeka Ihedioha as Governor of Imo state on the ground that he did not score majority of the lawful votes in the March 9, 2019 governorship election.

Abubakar while reacting to the judgment of the Supreme Court, which nullified the election of Ihedioha, described him as a great leader of men and resources.

In a statement issued yesterday in Abuja, the former Vice President, urged Ihedioha to accept the court judgement in good faith.

According to him, “I can only say that since the Supreme Court is final, we must accept its judgment, however unexpected and unpalatable it may be. The rule of law must guide our paths even if logic sheds light on a different path”

“Let me state unequivocally that I solidarise with Ihedioha, a man I knew to be a great leader of men and resources. In the fullness of time, I am convinced that he will overcome this setback and emerge stronger,” he said.

The former Vice President, who lost presidential election in the 2019 general elections, also expressed solidarity with the party, as he said that he stand fully with the PDP.

Abubakar recalled that the PDP provided genuine democracy for Nigeria when it was in power, adding that it was the party’s destiny to democratically restore what had been lost due to the encroachment of anti-democratic agents.

“Philosophers have said that tough times never last, but that tough people do. I urge the people of Imo and the entirety of the Nigerian people not to give in to despair.

“This nation has gone through despotic times before, and we have survived them and thrived. I am very confident that this history will repeat itself.

“My greatest desire, and one I hope to see again in my lifetime, is that Nigeria will fulfill its potential as the land of Unity and Faith, Peace and Progress.

“These four ideals have been missing from our borders for a while, and all freedom-loving Nigerians ought to henceforth work together to bring them back. So help us God” the statement stated.