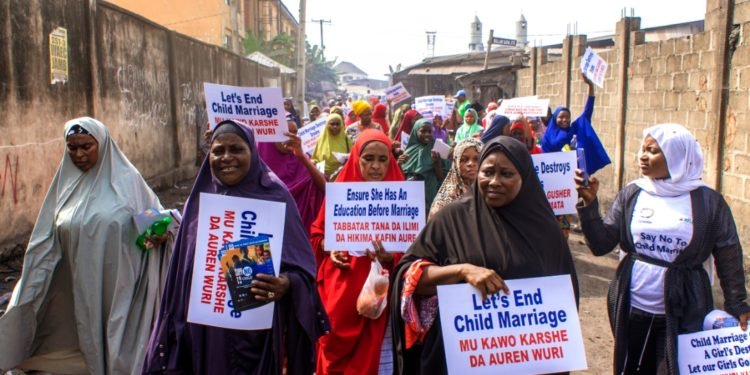 Following a Town Hall meeting organized by the Centre for Women’s Health and Information (CEWHIN), a non-governmental organization on Saturday January 11, 2020, at Idi-Araba, women and young girls took to the streets with their placards chanting anti-child marriage messages.

Residents of Idi-Araba community in Mushin Local Government Area of Lagos State,  have kicked against the cultural practice of child and forced marriages in the area and the state by extension.

They condemned the practice of child and forced marriages in very strong terms, advising older men to stop the practice of marrying young girls and consequently denying them their right to education. CEWHIN, under its Campaign against Child Marriage Initiative (supported by Rise up based in the Public Health Institute Oakland, California USA), exposed the participants which included girls, boys, parents and community leaders to the gains of educating the girl child, the health implications of child marriage among others.

The programme officer for CEWHIN, Tolulope Aderibigbe said the event was a huge success. According to her, “we did a survey and found out that child marriage is being practiced here in Idi-araba, we then decided to do a community sensitization campaign to let the people understand the implications of child marriage and also know that their girls can contribute more to economic development if marriage is delayed, and the girls are allowed to further their education and pursue a career.

A woman leader in the community, Hajia Rabiu was elated by the event. According to her: “Today’s programme is very interesting because we are trying our best on how to stop the practice of child marriage in Idi-Araba community.