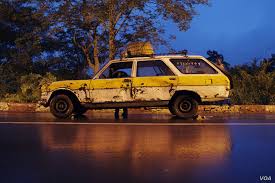 Plateau state sector command of the Federal Road Safety Corps, FRSC, has warned owners of unworthy vehicles to take them off the road or face prosecution.

This was contained in a statement released by its State Route Commander and Public Education Officer- Mr. Andrew Bala.

Bala said, “The Plateau State Sector Command of the Federal Road Safety Corps is worried by the rampant and incessant crashes and breakdown of heavy-duty trucks and articulated vehicles within Jos metropolis.

“Crash investigations and analysis have shown that most of these crashes and breakdown are as a result of brake failure and mechanical deficient vehicles.

“It is in the light of this that the command is admonishing all owners’ of heavy-duty trucks, articulated and dysfunctional vehicles to carry out routine checks and repairs on their vehicles as very soon the command will carry out a special patrol to wipe out and prosecute offenders of unworthy vehicles within the Jos metropolis and environs.”